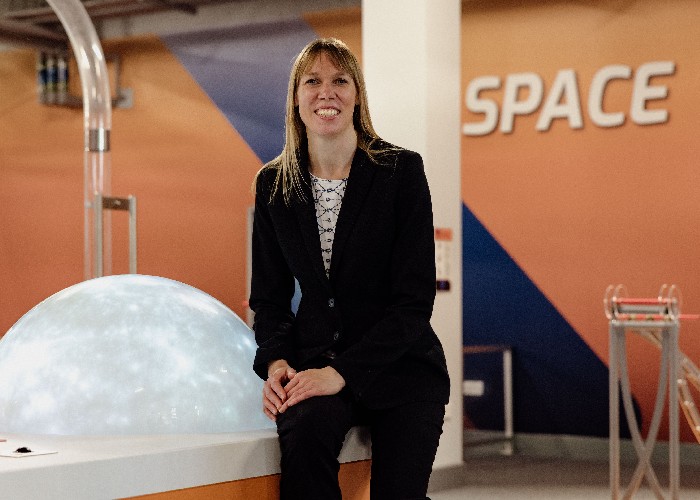 Aberdeen Science Centre reopened to the public last November after the major project to create an aspirational science centre that reflects the STEM priorities for both industry and education.

More than 60 new interactive exhibits over two floors now await visitors, including RoboThespian, a chatty humanoid robot sponsored by the centre’s Digital Futures Partner, Equinor, and The OPITO Theatre of Energy – the UK’s first immersive experience of its kind.

Around 100 invited guests attended the event today, when Professor Heymans unveiled a commemorative plaque to mark the centre’s transformation.

An astrophysicist from the University of Edinburgh and a world-leading expert on the physics of the dark universe, Professor Heymans became the first woman to be named Astronomer Royal for Scotland earlier this year.

Accepting the almost 200-year-old honorary title, she said she wanted to use it to encourage people to develop passion for science and promote Scotland internationally as a world-leading centre for science.

“It is a great honour to join Aberdeen Science Centre in celebration of its reopening,” said Professor Heymans. “A fantastic visitor attraction with outstanding interactive hands-on exhibits, Aberdeen Science Centre provides the perfect place for curious young minds to have fun exploring the wonderful world of science and technology.”

The centre’s exhibits are aimed at all ages and are themed into six zones: Energy; Space; Life Sciences; Make It, Test It; and a dedicated area for the under-6s, as well as the Shell Learning Zone, where science, technology, engineering and mathematics (STEM) are brought to life.

They support ASC’s commitment to inspire a lifelong interest in science, by creating engaging experiences which are fun, informative and educational.

Natural light floods into the building thanks to an exposed roof structure, creating an airy and modern interior, with flexible corporate meeting spaces and a café operated by Grub.

The centre recently received its first accolade since reopening, the Travellers’ Choice Award from the world’s largest travel platform, Tripadvisor.

“Although we have had a challenging first year amid the COVID-19 pandemic, which also delayed our celebratory event, we are now open seven days a week and have welcomed thousands of visitors through the doors, as well as school groups and corporate guests.

“This is a celebration of all the work that has gone into redeveloping the centre to transform it into a modern visitor attraction which showcases STEM innovations through educational and fun exhibits and events.”

Aberdeen Science Centre’s £4.7million redevelopment was made possible by generous support and funding from the Inspiring Science Fund – a partnership between the Department for Business, Energy and Industrial Strategy (BEIS), UK Research and Innovation (UKRI) and Wellcome – with additional funding provided by Opportunity North East (ONE) and Aberdeen City Council.

Philomena Gibbons, Associate Director, Transition and Legacy at Wellcome, said: “At Wellcome we are so pleased to have supported Science Centres through the work of the Inspiring Science Fund.  We appreciate the hard work you put into developing the new centre, especially during such a difficult time.  For Aberdeen, the new centre is a place to be inspired by STEM subjects and we are proud to support residents in their science learning journey.  Congratulations on your opening.”

“The centre is not only educational, it’s fun and attracts visitors young and older from near and far and is part of a growing list of attractions in the city which attracts tens of thousands of people each year.”

Opportunity North East supported the business case for the redevelopment of Aberdeen Science Centre (ASC) and provided vital co-funding for the project.

Jennifer Craw, chief executive of Opportunity North East, said: “Engaging young people in science and technology is essential for skills and jobs as the region develops its leadership role in the low-carbon economy and tech. ASC has become an outstanding visitor attraction and inspires people to develop STEM skills for their future careers.”

The project secured a further £1.5million from funders and sponsors including OPITO, Shell, Equinor, bp, The Robertson Trust, TAQA and CNOOC International to deliver quality exhibits and programmes to enhance the overall visitor experience at the venue, as well through outreach work.

TechFest and TAQA present STEM in the Park

Search for a Santa for Aberdeen Science Centre