Aberdeen set to honour Armed Forces past and present 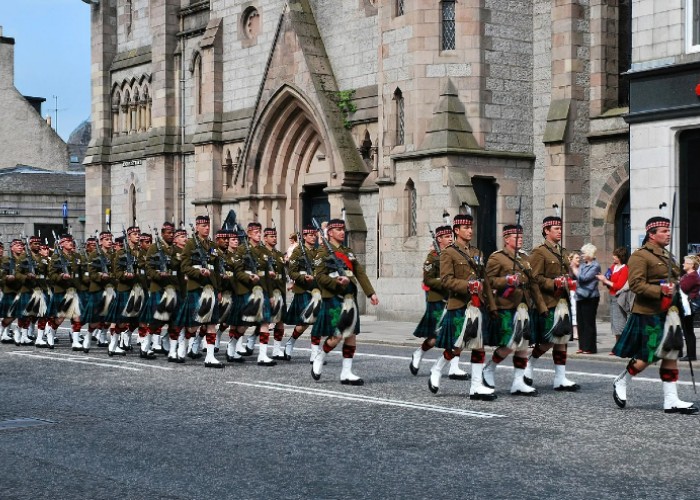 CROWDS will line Union Street as Aberdeen welcomes more than 1,000 serving, veteran and cadet force personnel when they parade through the city centre to mark Armed Forces Day.

The City of Aberdeen will welcome more than 1,000 serving, veteran and cadet force personnel when they parade through the city centre to mark Armed Forces Day on Saturday 25 June. Crowds are expected to line the length of Union Street to show their appreciation of the work of the Armed Forces.

A large crowd is expected to watch the march, which will include massed pipes and drums and vintage military vehicles, as it gets under way at 11am at Albyn Place and then heads down Union Street to the Castlegate.

Local group the 2nd Hilton Rainbows and 47th Aberdeen Girl Guides will give out 2000 free hand-held flags for the public to wave. One side of the flag was designed by competition winner Zuzanna Bolkowska, a pupil at Sunnybank School.

As the parade passes the Town House, in his role of Lord-Lieutenant Aberdeen City Lord Provost, Councillor David Cameron, will take the salute along with top military personnel.

Lord-Lieutenant David Cameron said: “Aberdeen always embraces this opportunity to say thank you to personnel for their service to the country by turning out in large numbers to watch the parade. It’s heart-warming to see spectators young and old pay tribute to the British Armed Forces community for their hard work, dedication and efforts to keep us safe in the UK and across the globe.”

The following traffic restrictions will be in place to allow the parade to pass safely:

The north side of Albyn Place between its junctions with Albyn Grove and Rubislaw Place. Parade vehicles will be exempt.

Albyn Place between its junctions with Albyn Grove and Victoria Street

Alford Place, Aberdeen, between its junctions with Victoria Street and Union Street

Back Wynd between its junctions with Schoolhill and Union Street

Union Street between its junctions with Holburn Street and Castle Street

Castle Street between its junctions with Union Street and King Street

Chapel Street between its junctions with Union Street and Thistle Street

Alternative routes will be available.

From King Street on to West North Street

From Rosemount Viaduct on to Skene Street

From Holburn Street on to Willowbank Road

From Hadden Street on to Market Street

On Exchequer Row and Shiprow.

All other taxi ranks will be open for business between 10.45am until 12.30noon on Saturday 25 June 2022, apart from the one listed below which will have the following restriction/change.

Due to the road closures nearby, the Marischal College car park which is accessed from Queen Street, will open later than usual at 1.00pm. All other city centre car parks will be open as normal.