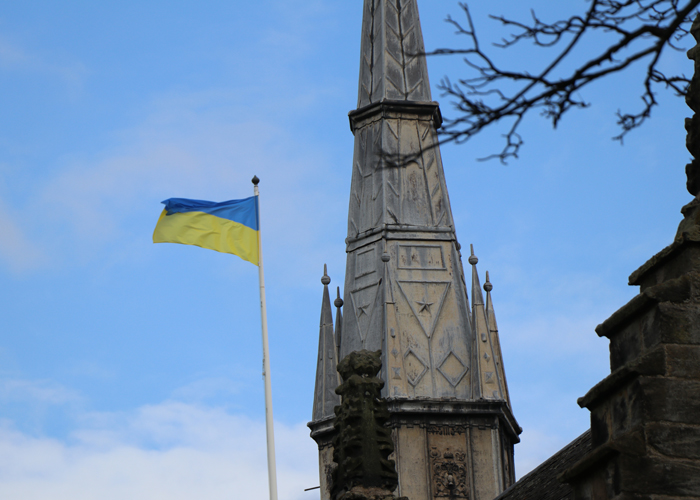 AN URGENT fundraising appeal has been launched to help support students and scholars who have been displaced by the ongoing conflict in Ukraine.

The University of Aberdeen Development Trust’s Student & Scholar Sanctuary Fund will directly help those who have been forced to leave their education continue their studies in the north east of Scotland.

Alumni around the world are being asked to donate to the fund which will provide displaced students and scholars with essential items such as food, clothing and laptops.

The University has pledged to waive fees, offer free accommodation, and provide vital pastoral support for undergraduate and postgraduate students who have been displaced from Ukraine.

Co-director of the University of Aberdeen Energy Law Centre Dr Daria Shapovalova moved from Ukraine to Scotland eight years ago. Before completing her PhD at the University of Aberdeen, Daria studied in Kharkiv, Ukraine’s second-largest city, which has been under sustained attacks since late February, and has been described as one of the deadliest battles of the invasion.

She said: “My sister and two nieces were living just outside Kharkiv and had to flee their home at 5am to the sound of explosions. Many of my former classmates fled with their children, hiding in bunkers, while others joined the Ukrainian armed forces to fight the invasion.”

“Students have been forced to live in other countries or are scattered throughout Ukraine. Many do not have reliable internet connections and cannot complete their studies. Their dreams of a higher education and a bright future have been taken from them, along with everything else they have lost.”

“While tuition fees are being waived for Ukrainian students, there are further complications including living expenses, admissions, and English language support. We want to be as helpful as possible to any Ukrainian student wanting to commence or continue their studies in Scotland and ask for your support in helping us do that.”

Katrina Allan, Head of Alumni Relations & Regular Giving, said a donation of any size would help make a difference to the lives and education of those seeking sanctuary.

She explained: “We continue to honour our founding principle of being ‘open to all’ – a motto which resonates deeply today. Devastating recent events have shown again and again how important this principle is.”

“The new members to our Aberdeen family will be arriving scared and grief-stricken. We are asking for your help to offer them comfort and the assurance that the University of Aberdeen will remain a safe and supportive refuge during these distressing times.”

“Many will arrive without basic necessities, such as toiletries, clothing and bedding, and with little or no money for food. Your donation will help to provide these items, as well as bursaries so that they can purchase their own items to replace belongings that were lost.”

“As an international community, with staff and students from across the world, the University of Aberdeen condemns the invasion and war in Ukraine.  We stand with Ukraine and all those at risk and offer our unqualified support and solidarity.”

Anyone who would like to donate can do so by visiting the Student and Scholar Sanctuary Fund on the University website.