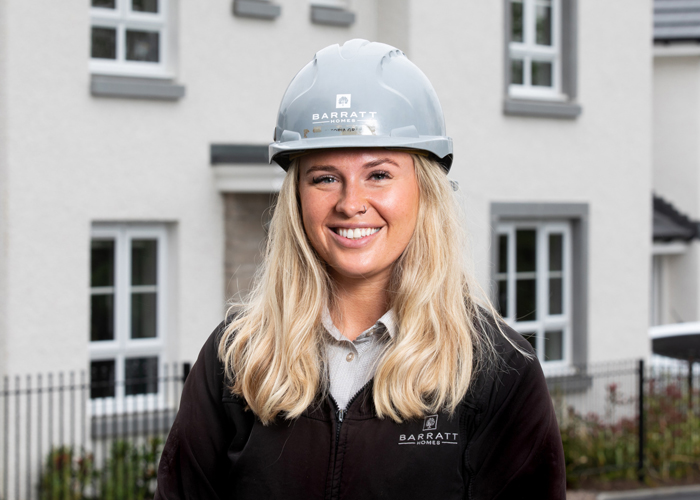 Victoria Chalmers of Hopecroft in Aberdeen

A TOTAL of 15 site managers from Barratt Developments Scotland, which includes Barratt and David Wilson Homes, have won a top national award for the quality of the homes they are building.

Eight winners from Barratt and David Wilson Homes in North Scotland were announced, the most the region has ever received. They receive the Pride in the Job Quality Award from the National House Building Council (NHBC), known as the “Oscars of the housebuilding industry”.

They include four winners from the Aberdeenshire area, including Allan Barclay of Whiteland Coast in Newtonhill, Barry Cooper of Osprey Heights in Inverurie, Scott MacNicol of Riverside Quarter in Bucksburn and Victoria Chalmers of Hopecroft in Aberdeen.

The 15 Pride in the Job Quality Awards is more than any other housebuilder, and represents the 18th year in a row that site managers from Barratt and David Wilson Homes have won more of these awards than any other builder, underlining the long term commitment the housebuilders have to building high quality homes.

The awards showcase the best site managers in the country who can demonstrate exceptional standards in building new communities, delivering the highest quality homes for their customers. Each site manager is judged on a range of key criteria including health and safety, their technical knowledge, customer service and attention to detail.

Every site manager who is registered with the NHBC is automatically entered into the awards, with just 450 winners being selected from over 11,000 entrants.

The awards also help to build quality standards across both developments and teams, with winning site managers invariably having an assistant site manager working with them. They in turn learn the high standards that are needed to win, so increasing quality throughout the industry.

David Palmer, managing director of Barratt and David Wilson Homes North Scotland, said: “We want to make our customers happy by building high quality homes for them, and are honoured for our sites to have received such a high accolade; a reflection of the dedication to delivering high-quality homes at all the Barratt and David Wilson Homes developments in the region. We are very proud of our record, having won more of these awards than any other housebuilder for 18 years in a row.”

These awards closely follow Barratt Developments being awarded 5 stars by its customers for satisfaction in the annual Home Builders Federation (HBF) new homes survey. To be rated 5 star means that more than 90% of its customers would recommend one of its homes to a friend, with Barratt being the only major national housebuilder to be rated 5 star for 13 years in a row.