Celebrate Aberdeen parade and awards night to return in 2022 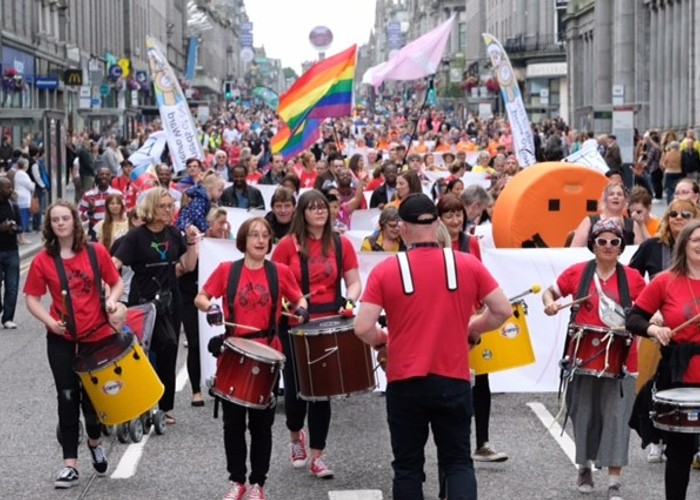 CELEBRATE Aberdeen, which showcases the enormous contribution that charities, voluntary groups, and social enterprises have on life in North-east Scotland, will make a welcome return this year.

Cancelled for the last two years due to the coronavirus pandemic, the highly popular parade, organised in partnership with Aberdeen City Council, will be held on Saturday, August 27, with the Celebrate Aberdeen Awards taking place three weeks later at P&J Live on Saturday, September 17.

In 2019, 5,000 people representing more than 180 organisations took part in the parade which travels the length of Aberdeen’s Union Street. Thousands more come along to watch and show their support. In addition to third sector organisations, the parade also features cultural organisations, youth groups, sports clubs and music, dance, and entertainment groups.

This will be the third time that the Celebrate Aberdeen Awards will be held. More than 500 people attended the previous event in 2019, which shone a spotlight on finalists and winners in 11 award categories.

“We’re really pleased to be able to announce that both events are taking place again this year,” said Celebrate Aberdeen volunteer, Emily Findlay. “We consulted with many of the participating groups to get their views on starting up again this year, and the answer was a resounding yes. The work these groups and organisations has done over the past couple two years has been invaluable in helping so many people get through the pandemic and there is a real appetite for people to come together to recognise and to celebrate this.

“That said, we are very conscious of course that the pandemic is very much still with us, and we will be mindful of any changes in advice or restrictions which might come into effect in the lead up to the two events.

“Because of this, we have decided to scale back this year and celebrations will focus solely on the parade rather than following it with a weekend of live entertainment across the city.”

Barney Crockett, Lord Provost of Aberdeen City Council said: “Aberdeen City Council remains a firm supporter of Celebrate Aberdeen which always provides an exciting and fun-filled attraction in the city’s events calendar. The parade has been much missed and we welcome its return and the opportunity it provides to showcase the great work done by charitable and volunteer organisations across the city.

“Prior to the pandemic the event gained in size and scope year-on-year and the return of the parade represents an opportunity to kick-start a continuation of this trend.”

Also returning this year are the Union Street mile races, which immediately precede the parade on the morning of August 27. Organised this year in association with Celebrate Aberdeen by Myles Edwards of the Gathimba Edwards Foundation (GEF), the race has been renamed Mel’s Union Street Mile, in memory of Myles’ dad Mel who passed away in 2019.

“Prior to my dad’s passing he had spoken about how wonderful it would be to have an event in his memory,” said Myles. “The mile is a distance with great history but one which is not run very often. I know he would be delighted to think that a special mile race down the main street of his home city was to be named in his memory.

“I have fond memories of my dad being starter of the Union Street Mile in its first year and cheering me on to 2nd place in 2011 and 1st place the year after. Also, with Gideon Gathimba, co-founder of GEF, and myself first meeting on the start line of a 1-mile race at Aberdeen Sports Village, it makes it even more special and is a great honour for GEF to organise this event.  We are hugely grateful to everyone at Celebrate Aberdeen for this opportunity and look forward to a fantastic event.”

Because of the tight time available due to road closures and the start of the parade at 11am, entrants must be able to complete the mile in under 11 minutes.  Anyone unable to race on the day can do so virtually and submit their completion time to info@gathimbaedwardsfoundation.org.

To apply for Mel’s Union Street Mile, which is part of the GEF Safari Series, visit www.gambithaedwardsfoundation.org