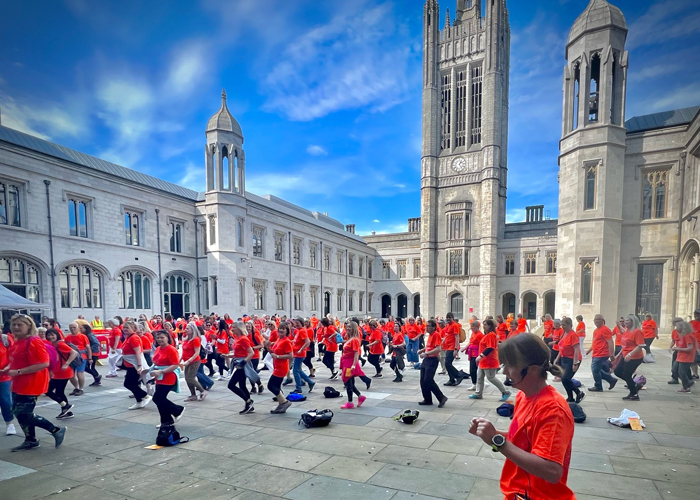 The Culture Crawl warm up at Marischal College Quad

CULTURE Crawl organisers have already been inundated with requests from venues to be part of next year’s event after this year’s walk raised thousands of pounds for Maggie’s Aberdeen.

More than 300 people warmed up at Marischal College before taking to the streets of the Granite City on Friday night for the fifth annual event, with fundraisers treated to a behind-the-scenes concert at the historic Bon Accord Baths, as well as arts and crafts, food and entertainment from choirs and musicians, and a tai chi session at the Victoria Park fountain.

The event, which was sponsored by Neptune Energy, started from the Marischal College Quadrangle, with the 7.5-mile trek taking in venues including Castlegate, Aberdeen Art Gallery, Bon Accord Baths and the Nuart display on Jopps Lane.

Maggie’s Aberdeen Fundraising Manager Richard Stewart said: “It was amazing to see such a wonderful turnout for the event, which was back in its usual early summer spot following Covid.”

“We are incredibly grateful to everyone who gave up their Friday night to pound the pavements for Maggie’s Aberdeen, and their efforts will go a long way to ensuring we are able to continue providing much-needed care for people affected by cancer, as well as their families.”

“There are too many people to thank individually, but the army of volunteers, venue managers and owners, musicians, entertainers and other partners made it such a memorable evening, and we are thankful to them all for taking part.”

“We are particularly conscious of the financial climate we live in, and our hearts are warmed by the generosity of people who donated money. Hopefully we were able to repay those who took part with an entertaining evening.”

Since being launched in 2017, the annual event has raised around £300,000 for Maggie’s Aberdeen, which is based within the grounds of Aberdeen Royal Infirmary, with next year’s Culture Crawl scheduled to take place on Friday, June 16. Venues and entertainers interested in taking part should contact Richard Stewart on 01224 612914 or aberdeenfundraising@maggiescentres.org

Richard added: “One of the aims of the event was to show people how welcoming and beneficial the work that we do at the centre is, and while the event may be over for another year, there is still time to donate, with every penny gratefully received.”