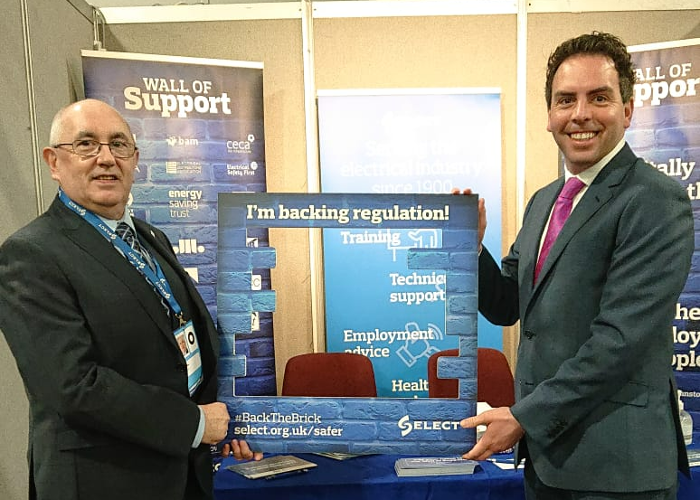 SELECT’s campaign for regulation of the electrical industry continues to attract more backing, with two major industry organisations and four MSPs adding their names to the trade association’s Wall of Support.

The Lift and Escalator Industry Association (LEIA) and Federation of Environmental Trade Associations (FETA) have both signed up to the online resource, which shows the organisations and individuals supporting the crusade for regulation of the electrical industry.

They have been joined by a quartet of Conservative MSPs who added a virtual ‘brick’ to the wall at their recent party conference at the P&J Live venue in Aberdeen.

The MSPs were recruited to the cause after SELECT’s Specifier & Client Relations Manager Yvonne Wilson spent two days speaking to politicians, party officials and delegates at the conference on 18 and 19 March. Helped by Eric Rae, Vice-Chair of SELECT’s Aberdeen & North East Scotland Branch, the exhibition also saw existing signatories Alexander Burnett and Brian Whittle drop by to say hello and reiterate their support for the long-running campaign.

Yvonne said: “The conference was a big success and gave us the opportunity to speak to MSPs face-to-face again and explain the importance of regulation. It was great to be able to outline the case for protection of title in person and receive further backing in return.”

The new additions mean the Wall of Support now boasts 49 MSPs and two MPs from across the political spectrum, in addition to a host of high-profile industry organisations and SELECT Member firms who have pledged their backing.

One such new addition is FETA, whose Chief Executive Chris Yates said: “As we see greater use of renewables such as solar and heat pumps, poor quality electrical work carries huge risks to people’s homes, their businesses and even their lives.

“It is therefore vitally important that consumers are helped to make informed choices whenever they employ an electrician.”

“We therefore support SELECT’s campaign to regulate electricians by introducing protection of title for the profession of electrician.”

SELECT’s campaign, run in partnership with the Scottish Joint Industry Board, the Scottish Electrical Charitable Training Trust and Unite the Union, aims to make it an offence for someone to call themselves an electrician when they have no, or inadequate, qualifications.

The Scottish Government has set up an Electricians Working Group to explore the issue and two high-profile consultations on regulation have also taken place, both of which have overwhelmingly supported statutory regulation.