First Turbine up at 1.1GW Seagreen 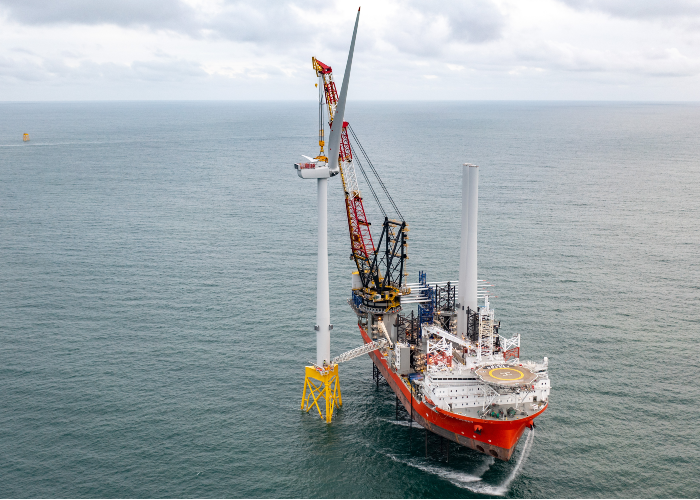 Seagreen is Scotland’s largest renewable energy project and one of the biggest private investments in Scottish infrastructure. Once completed, the 1.1GW Seagreen offshore wind farm will be capable of generating around 5,000 GWh of renewable energy annually. That’s enough clean and sustainable electricity to power more than 1.6m UK homes and save around 1.6m tonnes of carbon dioxide emissions annually, making a significant contribution to Scotland’s and the UK’s net zero targets.

Components for the first turbine to be installed, including blades, nacelles, and the supporting towers, were transported to site by installation contractor Cadeler’s giant windfarm installation vessel Wind Osprey from Vestas’ turbine marshalling base at Able Seaton Port in Hartlepool, North-East England. The massive turbine was installed onto a giant 2,000 tonne three-legged caisson jacket foundation fixed to the bottom of the North Sea floor.

Situated around 27km off the Angus coast, the £3bn wind farm is a joint venture between SSE Renewables (49%) and TotalEnergies (51%). SSE Renewables is leading the development and construction of the Seagreen project, supported by TotalEnergies, and will operate Seagreen on completion for its expected 25-year lifetime.

“Seagreen is a project that’s always pushing boundaries and is full of firsts. Installing the first turbine at any offshore project is a really important milestone but when that turbine is also the first of its type to be installed anywhere in the world, it makes even more exciting. Once operational, the Vestas V164-10.0 MW turbines at Seagreen will be the most powerful offshore turbines in Europe, generating 1.1GW of installed renewable energy at what will be Scotland’s largest offshore wind farm installed on the world’s deepest fixed bottom turbines.

“As Scotland’s offshore wind champion, I’m truly proud that SSE Renewables is breaking these boundaries on Seagreen with our project and supply chain delivery partners. And I’m looking forward to working across our teams to complete project delivery through 2022 ahead of entering commercial operation in 2023.”

Philippe de Cacqueray, Head of Offshore Wind UK at TotalEnergies, said: “TotalEnergies is very pleased to see the first turbine installed on the Seagreen project. As a company that is working towards net-zero and investing in Scotland in order to reach that ambition, reaching this important milestone shows that we are making good progress. By the end of next year we expect that all of Seagreen’s turbines will be in place, ready to start providing homes and businesses across the country with renewable power.”

The Seagreen turbine installation programme is running in parallel with the ongoing foundation installation campaign, which is being run by Seaway7 out of Scotland’s Port of Nigg.

First power is expected by early next year with the offshore wind farm expected to enter commercial operation in 2023. When complete, the 1.1GW Seagreen Offshore Wind Farm in the outer Firth of Forth will be Scotland’s largest, and the world’s deepest, fixed bottom offshore wind farm.

“As key milestones go, the installation of the first turbine is one of the most exciting. It’s a fantastic achievement and a testament to the whole project team that we have reached this moment and we’re all looking forward to getting the remaining 113 turbines in.

“The Seagreen project is bringing significant benefits to the local community, to the UK supply chain and, once completed, Seagreen will make a significant contribution to our net zero targets by powering the equivalent of two thirds of Scotland’s homes.”

“The commercial installation of the first V164-10.0 MW at the Seagreen project is a major milestone for Vestas and continues to push the boundaries of offshore operational excellence. We’re proud to be supporting SSE Renewables and TotalEnergies in the delivery of this important renewable energy project for Scotland with Europe’s most powerful turbine currently installed commercially.

“The project’s progress has been bolstered by outstanding collaboration by all parties, and we look forward to continuing the installation campaign of the Seagreen project into 2022.”

In addition to the wider economic benefits of the project, Seagreen continues to contribute to the local community in Scotland, whether it’s through the project’s £1.8m community fund, the construction of the long-term operational base at Montrose Port using local contractors, and the creation of long term, skilled roles based out of Montrose in the lifetime operation of the offshore wind farm.