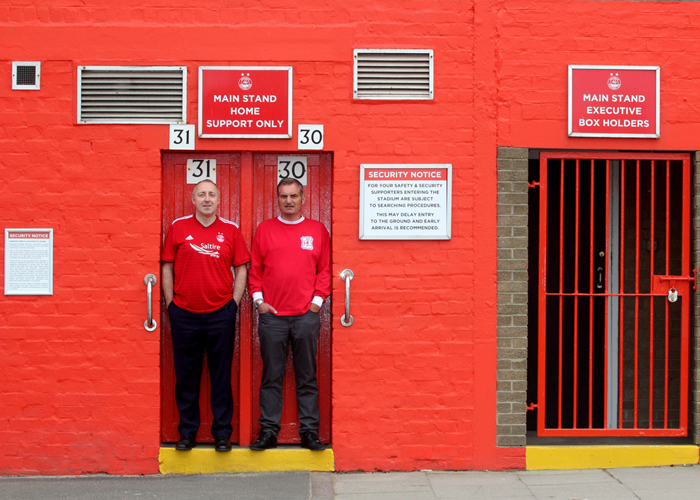 A FUNDRAISING challenge, with the goal of visiting the site of every football ground in Ireland where Aberdeen Football Club has played, will kick off in June following a two-year postponement.

Local businessmen, full-time football fanatics and lifelong Dons fans, Bob Bain and Jock Gardiner will embark on the soccer pilgrimage this summer from 8 to 12 June, to raise funds for an AFC Heritage Trail around Aberdeen. The trail, which is being developed by AFC Heritage, will mark places of importance to the story of the Dons and Bob and Jock are raising funds for commemorative plaques with interpretation to be erected at each site and the development of a walking trail app and guide.. The locations, which cover the previous grounds of the three founder clubs of the current Aberdeen FC – Aberdeen, Orion and Victoria United – include:

Bob Bain, who has only missed 22 home games in the last 44 years says, “This trip was planned for June 2020 following our successful fundraising trips in 2019 to visit 32 grounds which Aberdeen had played in across the UK and our first foray in 2018 to visit 18 club grounds in 18 hours. This trip will see us visit grounds and the sites of former grounds where Aberdeen FC has played and also grounds which have a link to the club such as Dundalk FC where Dons legend John Hewitt managed the team.”

Both Bob and Jock Gardiner are trustees of AFC Heritage Trust and Jock explains why embarking on this pilgrimage is important to them, “It’s really important to us to celebrate the history of the club – and of football – in order to ensure an important part of the city’s sporting history is not forgotten. The AFC Heritage Trail plaques will mark the places of historical interest and keep the spirit of the club alive across the city and not just at the current ground. We previously raised over £14,000 from our 2018 and 2019 tours so we hope to top this with donations as a result of our Irish challenge.”