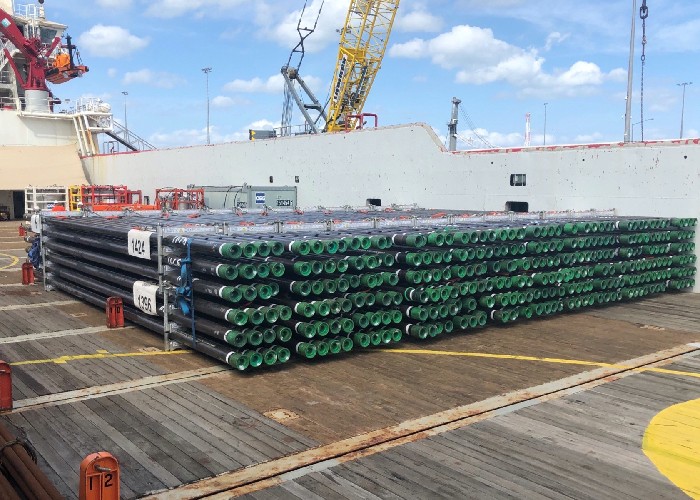 Global Gravity establish office and warehouse in Aberdeen – with two experienced industry professionals at the helm. The company will create local jobs with its patented TubeLock system, which makes handling of casing, tubing, and drill pipes easier, safer, and faster. The new local warehouse can support 5-10 drilling operations at a time.

WITH its headquarters in Esbjerg, Denmark, and offices in Stavanger, Houston, Doha, and Abu Dhabi, Global Gravity has created a global business with its patented TubeLock system, which improves the safety and efficiency of transporting and handling casing, tubing, and drill pipes.

Global Gravity is now increasing its focus on the oil and gas activities in the North Sea by opening a new office and warehouse in Altens Industrial Estate in Aberdeen, two miles from Aberdeen Harbour.

Leading the company’s UK Operations are David Craig (Base Manager), a specialist with over 20 years of experience within the lifting equipment industry, and Ian McCartney (Business Development), former Managing Director of Weatherford UK, with 40 years of experience in oilfield services.

“We have repeatedly proven that our TubeLock system makes handling of tubulars easier, faster and – above all – safer. We are in the process of building a local warehouse in Aberdeen, from which we will be able to support 5-10 drilling operations at a time,” says Base Manager David Craig.

With TubeLock, the world’s first “Tubular Transport Running System” (TTRS), Global Gravity can manage the entire handling and transport of casing, tubing, and drill pipes from the warehouse to the pier, onto the ship and out to the drilling rig. Studies show that the operator can save on average 18% of the time spend overall in the handling process. At the same time, TubeLock requires 60% less space and halves the amount of handling required on the offshore location.

Over the past few years, Global Gravity has built up a customer base around Aberdeen. However, partly as a result of Brexit, the local presence is increasingly required in order to serve customers optimally. The new office has been open for business since July, and in the past month alone, David Craig and Ian McCartney have made agreements with several major oil companies, and they expect new job openings for locally based technical staff within the next few months.

“The TubeLock system has great potential in the UK.The new Aberdeen facility makes a huge difference as it allows us to interact with local customers and arrange product demonstrations.Seeing the actual TubeLock system being loaded is a crucial selling point,” says Ian McCartney.

He believes the timing is good for the new Aberdeen facility, as the oil and gas industry is beginning to recover from the collapse in oil prices and COVID-19.Rig activity has stabilised for the UK, Norway, Denmark, and the Netherlands at 45 operating rigs, excluding platform drilling.

The way forward for handling tubulars

The TubeLock system is designed to prevent personnel injury and damage to equipment when handling casing, tubing, and drill pipes. Most accidents happen because the extremely heavy equipment is traditionally bundled with steel wires – a method which requires a lot of manual lifting. At the same time, large amounts of stored energy are released during unloading.

With Global Gravity, tubulars are fixed in the space-saving TubeLock modules before shipment, and because of the patented design tubulars run in hole at the rig site in only one handling.

“The TubeLock system is the way forward for handling tubulars.Oil and Gas UK (OGUK) has identified bundling and slinging of tubulars to be a high-risk process and has stated that we should work to eliminate this high-risk process within a timeframe agreed by all industry partners,” says Ian McCartney.