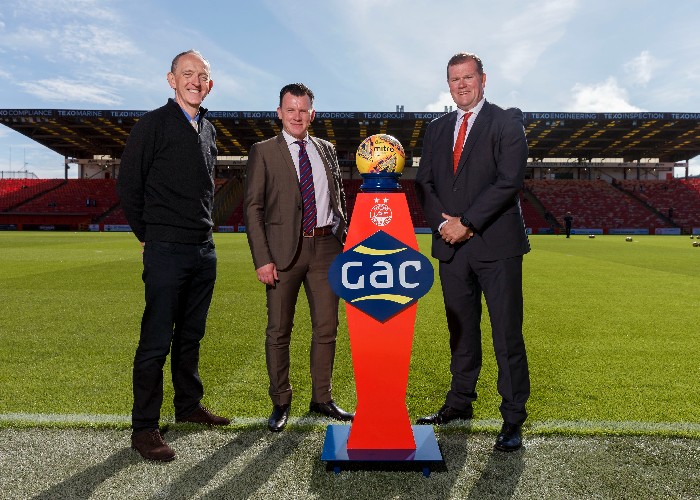 ABERDEEN FC has renewed its strategic partnership with GAC, taking the relationship into a second term in an enhanced multi-year deal.

As the Official Logistics Partner of Aberdeen FC, GAC has diversified its sponsorship across the Club, creating further social and digital presence across all AFC platforms and strengthening its engagement with Aberdeen FC fans throughout the world.

GAC, a global provider of integrated shipping, logistics and marine services, has enjoyed strong brand exposure through its prominent sponsorship of RedTV, the RedTV Matchday show, and via match-day social media graphics as they deliver match statistics to Dons’ supporters.

Their match-day presence will be further enhanced with the introduction of a new match ball plinth for all first team games at Pittodrie which will see GAC ‘deliver’ the match ball ahead of kick-off.

Stuart Bowie, GAC’s Group Vice President – Commercial, described the relationship with AFC as ‘the perfect match’. He said: “We first partnered with Aberdeen FC in 2019 after seeing the alignment between the Club’s ethos and the qualities GAC delivers – namely teamwork, timing, dexterity, precision and smart moves.

“Through this partnership we’ve been able to boost our visibility both locally and globally and it has also allowed GAC to forge stronger relationships with clients and partners.

“We’re confident that the growth of our relationship with AFC is another smart move and we eagerly look forward to adding our support to AFC Women as they tackle the new season in SWPL 1.”

Rob Wicks, Commercial Director at Aberdeen Football Club, said: “GAC has been an enthusiastic, committed and engaged partner over the past two seasons and we very much look forward to moving our relationship to the next level over the next three seasons.

“Aberdeen is an important hub for GAC and being able to deliver value both here and further afield through our digital channels is central to this partnership. We have invested heavily in these platforms in recent months and its paying dividends for everyone involved.”