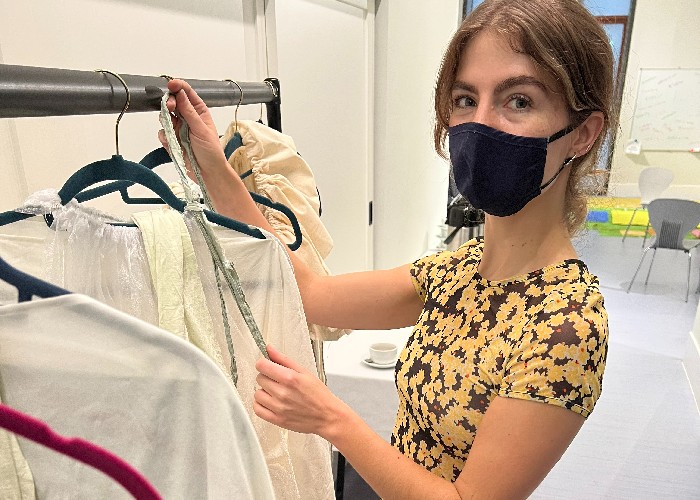 A VIBRANT parade takes to the streets of Aberdeen this weekend as British Art Show 9 comes to a close at Aberdeen Art Gallery on Sunday 10 October.

Plant Theatre for Plant People is a new work by visual artist Grace Ndiritu for British Art Show 9. Ndiritu has been leading a series of workshops with participants exploring the natural world through meditation, Shamanistic practices and spirituality.   The workshops culminate in Sunday’s parade, and have been supported by Gray’s School of Art graduates.

Gray’s School of Art’s creative unit, Look Again, has been working closely with Aberdeen Art Gallery to bring together the Beyond BAS9 programme to mark the final days of the exhibition in Aberdeen. This collaborative programme of exhibitions, talks and events brings together contemporary art organisations, collectives, artists and curators from across Aberdeen and the national network of British Art Show 9 partners.

The parade, which starts at Aberdeen Art Gallery at 2pm, promises to be a vibrant and colourful spectacle with dancing, costumes and masks that encourages members of the public to explore their relationship with the natural world and plants.

The costumes and props have been created during workshops at Aberdeen Art Gallery led by visual artist Grace and with the support of two Gray’s alumni and former Gray’s lecturer.

One of those involved is Gray’s graduate Aymee Charlton who studied Fashion Design and has made 15 costumes for the parade. Aymee tells us more: “I’m from Aberdeen and studied in the city and it’s really great to have something at home. I’ve been using my skills to create the costumes, using plant matter and food waste to make some really beautiful, organic prints. It’s been a great project to be involved in and I hope it leads to more opportunities in the city.”

Gray’s graduate, Kinga Elliot who graduated in Painting last year, is a support artist involved. Kinga, who is originally from Hungary but now lives in Laurencekirk, says: “I’m delighted to be involved. The British Art Show’s BAS9 has really put Aberdeen on the map and we’re ready to receive the next big event!”

Former Gray’s Lecturer in Contextual and Critical Studies, Christine Arnold Solomon, who has hand embroidered some of the costumes says: “The project has really brought people together from all backgrounds. As a former Gray’s lecturer, I’ve really enjoyed moving from being an educational provider to a learner. There’s a bit of trepidation ahead of the parade but the project’s being so well designed. It’s been so professional and a joy to be part of!”

Hilary Nicoll, Associate Director for Look Again, said: “This event is important for us here in Aberdeen, bringing performance and contemporary art to a wider audience and out onto the streets of our city as part of the Beyond BAS9 festival.  The event itself will also bring us together as a community to question art and the cross overs between culture and life. The themes explored through the public procession will make us rethink our daily interactions with nature and the world around us.  Ultimately, this event will help us all to celebrate and have fun.

“The programme speaks powerfully of the complexity, vitality and connectivity of creative practitioners working in the north-east of Scotland, prompting us to think about what’s next for contemporary art in the city-region, and what that might look like, beyond the British Art Show.”

The project explores how humans can better relate to plants in the twenty-first century and the parade is both a celebration of how we can better relate to plants in the 21st century and how art and creativity can be used in climate change activism.    Plant Theatre for Plant People project is supported by funding from the Arts Council England and the costumes produced in Aberdeen will be exhibited as part of the British Art Show 9 as it moves onto Wolverhampton.

A full programme of events for the Beyond BAS9 festival can be found at: