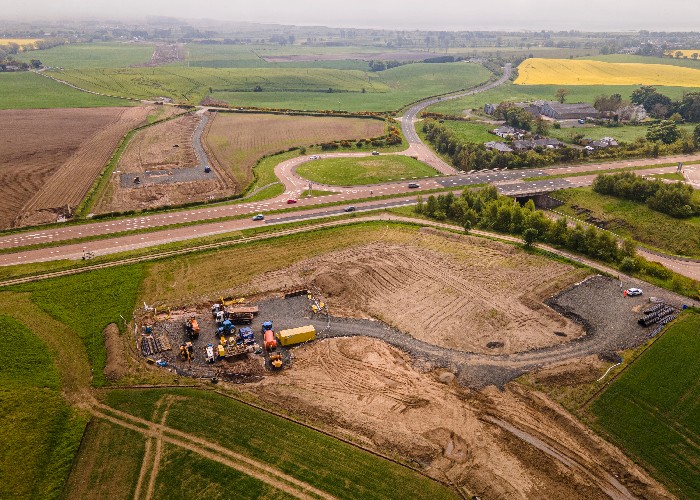 HDD works at the A90 near Tealing, Angus

CONTRACTORS on what will be Scotland’s largest offshore windfarm have reached a project milestone with the completion of Horizontal Directional Drilling (HDD) works. This work package was a key part of the project and now provides the ability to install the electrical cables required to transmit the electricity generated from the windfarm.

HDD is a technique that is used for the installation of ducting and avoids the need for open trenching/excavation. This has been used to insert ducting at eight locations along the onshore cabling route between landfall at the coast of Carnoustie and the project’s new substation currently under construction at Tealing airfield.

Locations where HDD has been used include a number of A Roads including the major A90 and A92 trunk roads, water course crossings, a Site of Specific Scientific Interest (Barry Links SSSI) and even the main East Coast rail line which connects Aberdeen to London.

“We’re very pleased with the delivery of the HDD works by the project team and our Contractors, where the works have been completed safely and with a minimum amount of disturbance.

“The non-intrusive nature of Horizontal Directional Drilling means that it has a minimal environmental impact. It reduces noise, vibration, waste and earthworks in comparison to the traditional method of open trenching, where plant machinery is used for the bulk removal and reinstatement of earthworks. In addition, the installation process has enabled key local and national transportation routes to remain open throughout and resulted in no disruption to route users whilst the works took place below ground.

“We would like to place our thanks to the people of Angus for their continued patience whilst these works were undertaken and also to the various Stakeholders that supported during the design and construction phases. The project team will now continue to work with our Principal Contractor Nexans to safely deliver the final construction works required for the installation of the electrical infrastructure.”

Steps in the HDD process:

Works are currently underway in Angus to pull electrical cabling through 19.5 kilometres of underground ducts which will connect the £3 billion Seagreen Wind Farm to the Scottish national grid. The cable installation work is scheduled to be completed by Spring 2022.