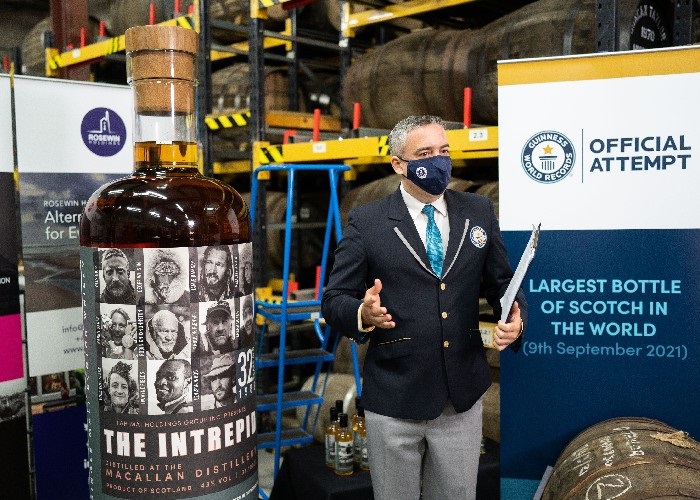 DUNCAN Taylor Scotch Whisky in Huntly, Aberdeenshire was the setting for a new GUINNESS WORLD RECORDS title for the largest bottle of malt whisky.

The team at the specialist independent whisky merchants took over an hour to fill the largest ever bottle of whisky, earning the 1.8m high bottle, a spot in the record books.

The bottle, owned by both Rosewin Holdings and Fah Mai Holdings, beat the previous record by 83 litres.  The last record, held by The Famous Grouse Experience, was confirmed back in August 2012 at 1.7m high and holding 228 litres or 50.15 gallons of their well-known blend.

The record is also tied in with a campaign promoting 11 titans of exploration including the world’s greatest explorer Sir Ranulph Fiennes.  All record breakers in their own right, several of the explorers were at the event including Paralympian gold medal cyclist Karen Darke, UK Adventurer of the Year Will Copestake, the first black Briton to reach the North Pole Dwayne Fields and the first person to row the Atlantic from America to England, Olly Hicks.  They oversaw a further 168 special bottles of 50cl Macallan that were created to go on general sale, all promoting each explorer with an inspirational quote and featuring their chosen charities.  These bottles will be available by auction later in the year.

Chairman of Duncan Taylor Scotch Whisky, Euan Shand said; “We were asked to bottle this whisky because of the care and attention we pay to all our whiskies and it was an honour to be part of this record title right here in our Huntly Headquarters.”

The record-breaking whisky will head to a top London auction house later in the year where it will be auctioned off and may break a further world record for the highest price for a bottle of whisky ever bought.