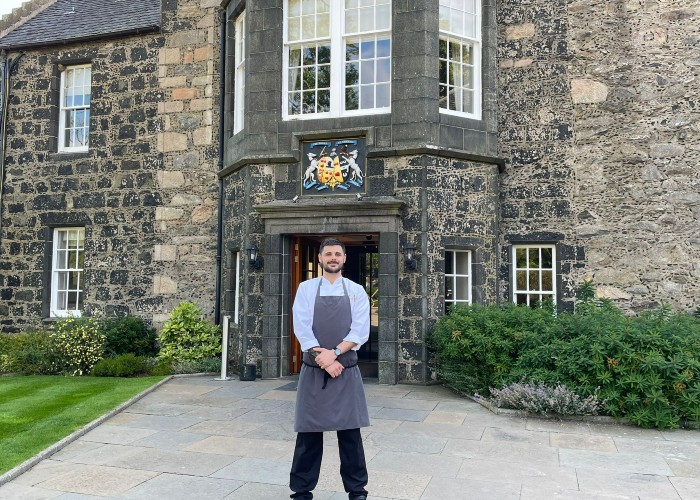 Aged 30 and originally from Forres, Clarke forged his career path when he won the Chef’s UK Accor Challenge Award for Britain, aged only 21.  He then honed his skills under Shirley Spear, the renowned previous owner of The Three Chimneys in Skye, helping them retain their 3 AA Rosettes.  Since then he has been Head Chef at two Aberdeenshire hotels and brings 14 years of experience to his new role.

Clarke explained; “The Executive Chef role at Meldrum House is a job I’ve always aspired to.  I look forward to building on the hotel’s reputation and putting my own flair on the menus with my take on Scottish produce with a French twist.  I’m also looking forward to working with Operations Manager Nicola Downie and her established front of house team to continue making it one of Aberdeenshire’s top foodie destinations.

Privately owned, Meldrum House has built a reputation for its food using world-class produce from local suppliers.  As well as their two Red Rosette dining room, they invested in four luxury dining domes which were launched last July and are experiencing huge levels of bookings, months in advance.  The hotel has won many major awards and has recently been shortlisted for another three, including Luxury Lifestyle Magazine’s Boutique Hotel of the Year.

General Manager Jordan Charles commented; “We’re delighted that Alan has joined our talented team, working on our established gate-to-plate dining experience.  The last few months since re-opening from lockdown has seen one of the busiest periods in the hotel’s history and we want to continue to build on that.  Alan is a highly regarded and innovative chef which makes for an exciting chapter ahead for the hotel.”