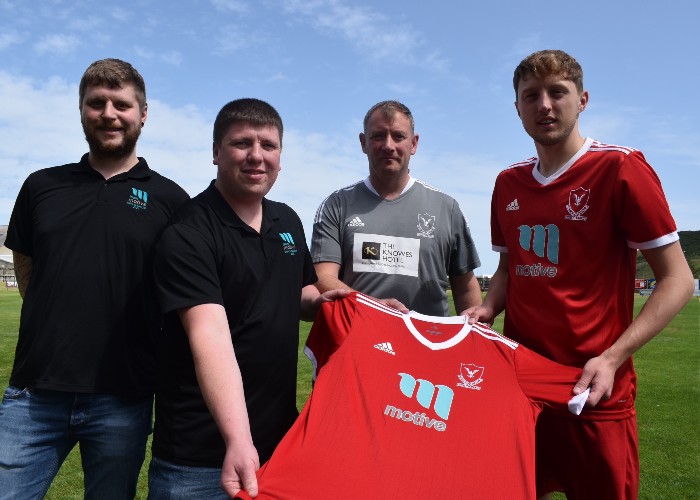 MOTIVE Offshore Group (Motive), specialists in the design, manufacture, rental and inspection of marine and lifting equipment, has announced its continued support of Deveronvale FC as main sponsor, a role it first took up in 2019.

The Boyndie-headquartered company, which prides itself on its community spirit and a determination to succeed, identifies strongly with the team and counts many of its employees as enthusiastic Vale supporters.

“We are incredibly proud to be associated with a club which has faced the past 18 months with courage and determination. Despite the challenges arising through the COVID-19 pandemic, Deveronvale has continued to look to the future, signing new players, appointing its first Head of Media, and with the arrival of Craig Stewart as manager, earlier this year.

“These actions embody a winning mentality, resulting in a club which is now in a better position than ever in terms of commercial focus and community engagement. One thing Motive values above all else is its people and our team spirit, we truly are #OneTeamOneMotive and this is one of the reasons we are so proud to align ourselves with the Vale who share this sentiment.”

“We are delighted to have benefited from the continued support of Motive. The past 18 months have, of course, been highly challenging for local football, which sits at the very heart of our local community. I have been greatly encouraged and impressed by the support Deveronvale has received, without which I think the Club would have not made it through to today.”

Behind the scenes the team has busy implementing all necessary COVID safety protocols to ensure everyone’s safety on match days and all associated with the Club are understandably excited to see fans back at Princess Royal Park.

The Club now anticipates its second home fixture of the season, on 7th August, which see them pitted against newcomers to the Breedon Highland League, Brechin City.

David Acton concludes: “We are delighted to welcome live football back to the area and everyone at Motive wishes Deveronvale FC all the very best for the long-awaited new season.”