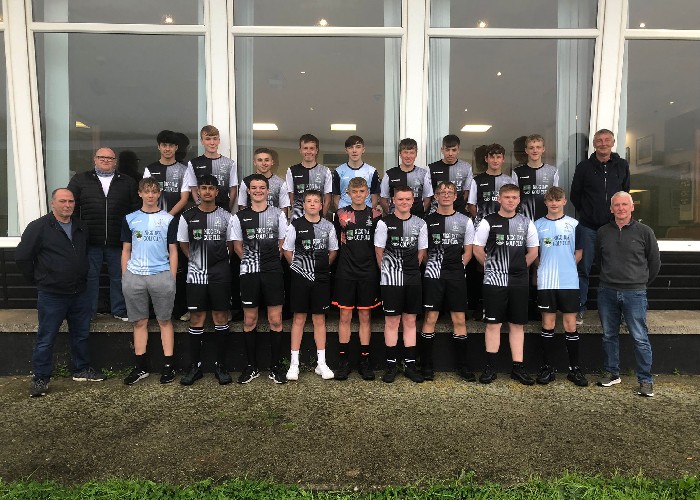 A LOCAL golf club has pledged support to a new Torry youth football team by sponsoring them for their upcoming season.

Dee United was set up this summer for under-17’s with the help of staff and volunteers from Denis Law Legacy Trust, a local organisation who support young people through sport and creative endeavour in communities throughout Aberdeen City.

Their flagship programme, Streetsport, runs in Tullos twice-weekly at Cruyff Court Neale Cooper, the new state-of-the-art and free sorts hub, where many of the team’s players enjoy their football.

Formally Dee Boys Club, the club folded four years ago due to a lack of support and demand.

The reinvention of the football team comes at a time when more and more young people are looking towards organised sports and clubs after over a year of lockdowns and uncertainty at school.

The financial help from Nigg Bay Golf Club has enabled the team to be kitted out in brand new football strips, with the golf club’s logo emblazoned on the front.

Findlay Harkins, Denis Law Legacy Trust Volunteer Coordinator, said: “We’re so thankful to Nigg Bay Golf Club for their support and generosity and it’s so good to see the team out playing in their new kits.

“We’ve seen how lockdown’s have effected young people across the city so bringing together a young community through this team has been such a great thing to be a part of.”

Graham Freeland, Club Captain of Nigg Bay Golf Club, said: “Nigg Bay Golf Club are happy to announce sponsorship of Dee United, a local under-17’s football team. We are very proud and privileged to be associated with Dee United. Nigg Bay are always willing to get involved with the community, especially in sport.”

The club has kicked off their season well, winning two games from their opening four games.

A NEW economic report which has placed Edinburgh in the top ten best performing cities for economic output and employment...

A LEADING figure in Aberdeen's hospitality sector has added his voice to calls to the city's councillors to reconsider plans...