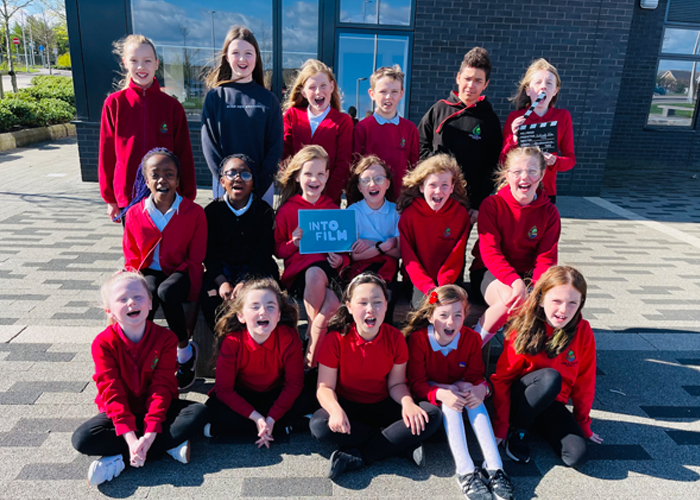 HILLSIDE Primary School, near Portlethen, has become the first school in Scotland and the only primary school in the UK to be nominated for an ‘Into Film’ award. The school’s submission was selected from among hundreds of UK entries and has been shortlisted in the Into Film Club of the Year category.

Representatives from the school will be heading to the final at the ODEON Luxe Leicester Square, London, on June 28, alongside celebrities from across the film industry.

Hillside Film Club has been running for four years and is led by teacher Fiona Lindsay.

“Fiona’s work is special not only because the children love it but because it is very inclusive and Fiona has been really successful in supporting a range of additional support needs. We are very proud of the film club and our very talented young film makers.”

Fiona managed to keep the film club running online throughout the pandemic, with quizzes, discussions and films to watch together online.

She explained: “We watch different genres of films the children may not normally watch. We have a go at film making activities and our mission is to engage pupils in film and open their eyes to the many opportunities within the film making industry, as well as having fun together exploring film.”

The Into Film Awards crew visited the school recently to capture some of the club’s talents in action. They were very impressed and are looking forward to seeing some of them again at the ceremony in London.

This in itself was a great learning experience for the children. Fiona explained how she felt, knowing she has been able to coax some children out of their shyness, accommodate a range of needs, including ensuring the club is accessible to a young person with a hearing impairment and engaging children who sometimes find school difficult, in learning about film.

She said: “I am absolutely beaming with pride at the way our children welcomed the Into Film crew to Hillside. The quality of discussions they enjoyed on camera were unbelievable – you would not believe some of our members are only 8 years of age – they are just superstars!  It is amazing to see how film can help support and develop literacy skills and confidence.”

Fiona has a P7 class who she has engaged in a range of Into Film learning opportunities too, alongside the film club which brings together children of various ages and stages from P4 to 7. The P7 class has been involved in a film making project in connection with Sky and Adobe called The Edit. They have also created mindfulness films to help support their transition as they move into S1.

Vincent Docherty, Head of Education for Aberdeenshire Council commented: “Congratulations to the film club and the whole team at Hillside. Gaining national recognition is superb and it is absolutely brilliant the club has captured the imagination of the children and helped build confidence and a range of important skills. I look forward to seeing your productions on the big screen!”

Find out more about the Into Film Award nomination: https://www.intofilm.org/news-and-views/articles/into-film-awards-2022-nominees