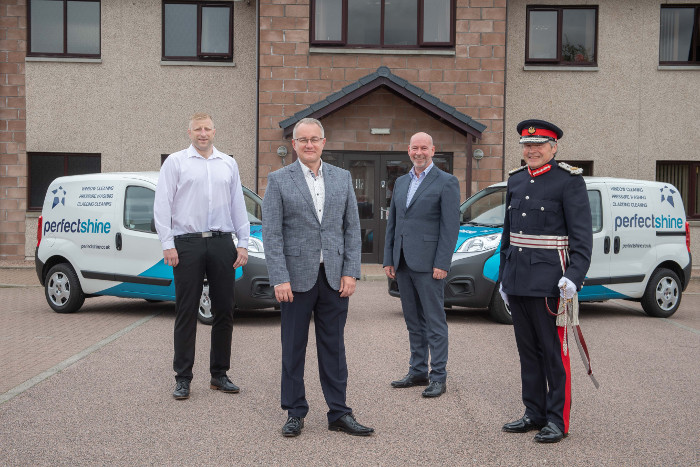 The business has been granted two Royal Warrants to formally acknowledge the window cleaning services it supplies to two Royal Households – the only UK firm to receive two such seals of approval in 2021.

The Royal Warrants will be proudly displayed at the company’s Blackburn office and on all 13 Perfectshine vans.

Steve Kennedy, managing director of Perfectshine, said: “It’s such a tremendous honour to be granted two Royal Warrants and is a great testament to the dedication and pride our entire team take in the of quality of their work and service

“Everyone at Perfectshine has played their part in our business earning this wonderful recognition and I want to pay tribute to them for their hard work and commitment.”

Sandy Manson, Her Majesty’s Lord-Lieutenant in Aberdeenshire, said: “I was delighted to learn that Perfectshine has received two Royal Warrants and I congratulate everyone involved in the business for achieving such special recognition.

“Perfectshine is a great example of the many high quality and progressive businesses who are based in Aberdeenshire and who play such an important role in strengthening our local economy.”

Perfectshine primarily operates in the Aberdeen and Aberdeenshire areas, but also has contracts in the Highlands, Tayside and the Central Belt. The company provides window, gutter and cladding cleaning as well as power washing services to commercial and residential clients.

Steve, who lives near Inverurie, said: “Our ethos of excellent customer service has formed the foundation of Perfectshine and it’s how we have been able to sustainably grow our business over the years.”

Established in 2003, Perfectshine has a staff of 22 after adding eight people to its team this year.  Its sister company Perfect Hygiene is a leading provider of washroom services, hygiene materials and clinical waste disposal.