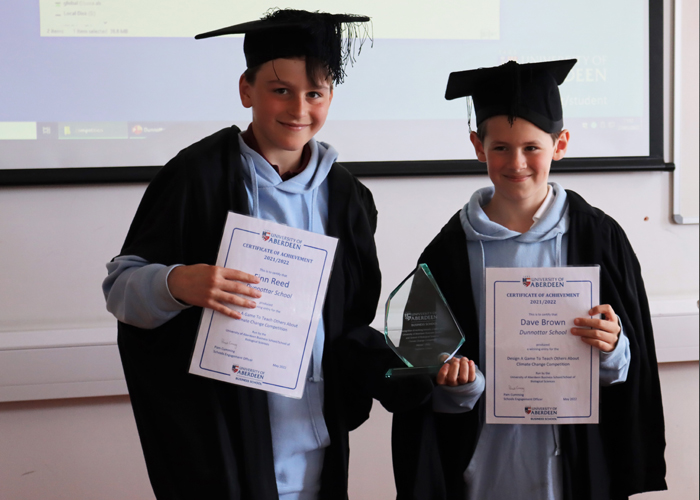 PUPILS from three north-east schools are celebrating after wowing the judges in a challenge that tasked them with designing and marketing an interactive climate change game.

Primary 7 students from Ashley Road Primary in Aberdeen, Hillside School in Portlethen and Dunnottar School in Stonehaven took part in the challenge run by the University of Aberdeen Business School and supported by retailer Geek Retreat.

As part of a seven-month project  the pupils were asked to think about what makes a good game before building a business case outlining how their game would work and its unique selling point, as well as its name, logo and slogan.

They conducted market research, looking at existing competitors and outlined how they would go about marketing their games to their target audience. They were also asked to consider what an advert for it would look like.

The ideas and prototypes were then put before a judging panel from the Business School, as well as Scott Leslie and Chris Robertson of Geek Retreat, the retailer, gaming café and events hub on Union Street, Aberdeen.

Winning teams from each of the schools were selected and invited for a tour of the University’s Old Aberdeen grounds.

“They demonstrated a great understanding of the climate challenges and how to convert them into fun games that capture the imagination. We were also impressed by the passion and commitment all the teams showed, going above and beyond with some teams using QR codes and video apps to actually produce adverts and interactive elements to their games.”

“It was very difficult to select the winning teams from each school as everyone had put a lot of thought into researching the topic and producing a game which can be used to educate their target audience.”

Dunnottar School’s winning entry was ‘ECO-SIM’, created by pupils Dave Brown and Finn Reid. Finn said: “I really enjoyed doing the research part of the competition and finding out more about climate change. It was very interesting.”

Dave added: “My favourite part of the day was the campus tour. I loved seeing all the different buildings and going in the lifts.”

Scott Leslie said: “It was a pleasure to see such thought put into climate change action. It’s clear to see that a generational shift has occurred here in the north-east of Scotland. From my part, I know that board games, as well as many group activities, are a real way to develop social, economic and strategic thought processes. Many of these pupils engaged with that and have shown exciting enthusiasm.”

“I shared my story about how my career has taken a very winding path and that there is no set rule for anyone. I hope the pupils enjoyed hearing that message but the overall theme showed that putting your drive and enthusiasm towards a goal is how you achieve it. A genuine desire is what that magic ingredient is. It’s delightful to see that Aberdeen City and Shire is showing lots of it. We might just be in safe hands.”

Pupils from each school were presented with a trophy, certificate and a range of games from Geek Retreat.