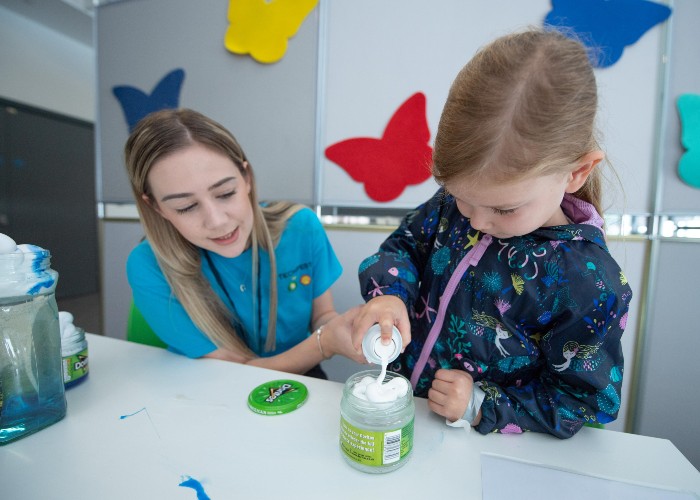 FAMILIES across the North-east have spent the summer creating secret codes, rockets and rainbow coloured rain as part of TechFest’s Sociable Science events.

More than 500 children and adults took part in a series of events, which used simple materials to create cool experiments and fun lessons.

Having proved popular, Sociable Science was then expanded into Aberdeenshire, popping up in Kintore, Inverurie and Chapelton thanks to support from bp and Shell.

TechFest created the programme with the aim of showing how science is involved in everyday life and even throughout general conversation.

Using teamwork and creativity, participants were able to learn new skills through the fun and engaging activities, all of which are easily replicated at home to involve family and friends.

Managing Director of TechFest, Sarah Chew said: “TechFest aims to promote Science, Technology, Engineering and Mathematics (STEM) to the public, so when we realised parents felt there was a gap in knowledge, we wanted to create an engaging programme that was fun for throughout the summer holidays, but also acted as a learning opportunity.

“Although Sociable Science was designed for the Summer of Play programme, it was apparent there was high interest from the public, so we opened it up to Aberdeenshire, something we could not have done without support from our principal sponsors, bp and Shell.

“While we’ve seen great mileage in our virtual events for reaching a much larger pool of people, we were thrilled to get back to in person workshops and events, while following all government COVID-19 guidelines to ensure safety for all attendees.

TechFest develops programmes which link in with the CREST Award Scheme, run by the British Science Association.

By taking part in Sociable Science, participants have completed several of the eight activities required to be awarded a CREST SuperStar certificate and iron-on badge. The remainingactivities can be completed by working through their TechFest booklet which is available alongside all the other resources on the TechFest website.

Attendees can apply for their CREST Star award by visiting: https://apply.crestawards.org/

Alongside a year-round programme of STEM education events, TechFest runs Aberdeen and North-east Scotland’s annual festival of STEM. In 2020 the event went digital for the first time in 27 years, reaching audiences on a global scale.